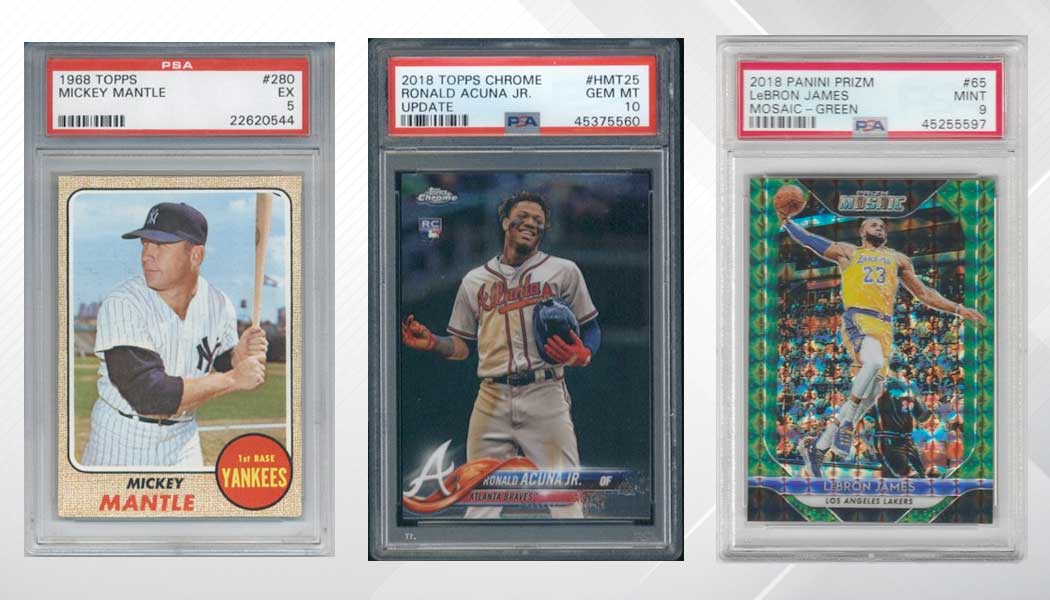 “Asset Class.”
No, I’m not referring to stocks, real estate, coins, silver or gold. I’m talking about the cardboard gold you may have sitting in a shoebox in your closet. That’s right, sports cards are now officially (and finally) being treated with the respect they have deserved for decades. After participating in the recent online Industry Summit, a gathering of nearly 300 manufacturers, distributors, shop owners, breakers, and more, this is a term I heard over and over. Why after all these years of being treated like Rodney Dangerfield (“I get no respect”) are sports card collectors and dealers finally being treated on an equal playing field with those who buy and trade stocks and other “accepted” commodities?

There are plenty of reasons but we will hit on just a few of the critical ones.

Reason #1 –  Other industries cannot continue to ignore the outlandish gains in prices for key sports cards in our industry.

This year alone, multiple modern sports cards produced after 2000 have sold for over 7, count ‘em, 7 figures,  with the Mike Trout superfractor nearly reaching 4 million dollars…surpassing even the famed Honus Wagner PSA 8 (once owned by Wayner Gretzky & then Kings owner Bruce McNall). The Wagner card (in any grade) has been one of the two primary benchmarks of our industry for decades when it comes to high-end sales (along with high grade 1952 Topps Mickey Mantle Rookie Cards), and yet now it is modern sports cards that are setting new records.

Reason #2 – Technological advances within the sports card industry have made it easier than ever to buy and “flip” cards instantly, much like stocks.

Sites like COMC.com now allow collectors to buy cards and resell them instantly without ever touching the cards and with no actual cash exchanging hands. Though COMC is the leader of these touch free buy and flip transactions within the industry, there are other sites now focused on buying and flipping graded cards exclusively, and plenty more such sites in the works.

Reason #3 – The market for grading and authenticated sports cards has never been hotter, building consumer confidence in what they are buying and selling.

As I tell my customers, having your card graded shifts them into becoming more “liquid” assets as once the cards are graded, you can quickly see real-time completed sales for the same cards in the same grade. The graded card market has seen a steady climb over the past 30 years, but the past 3 have seen a record number of submissions. The industry leader in the graded field is PSA (Professional Sports Authenticator), a division of parent company Collector’s Universe (NASDAQ: CLCT). Their stock has also soared this year, going from a low of $13.26 to a recent peak of $73.99 on November 5th. Why the increase in stock price? Record earnings will do that for you, and a backlog of graded cards submissions that will likely keep the company highly profitable for many months, if not years, to come. Customers are clamoring to get their cards graded. I should know, as my own company processes thousands of submissions for PSA every month and even after recent price increases, the demand is not slowing down.

Reason #4 – Millions across our planet have rediscovered (or discovered for the first time) the pure joy of collecting sports cards, and they just can’t get enough of it.

Some call it the “COVID-BOOM”, as so many were stuck in homes across our planet for extended periods of time this year and many fathers & sons (and even some mothers & daughters) learned the fun of sharing this hobby together again, or for the first time. While some thought this would just cause a temporary spike, more of us (including myself) believed that it was the dawn of a new era in collecting, where suddenly it’s “hip” to collect sports cards. No more closet collectors. They are coming out of the closets with their cards, getting the cards graded, and many are even becoming stay at home entrepreneurs.

Reason #5 – The legions of sports fans continue to grow worldwide.

Yes, the NBA and MLB had much lower ratings for the finals and the world series this year, but many believe that is due to the oddity of the season, with so few (if any) fans allowed to be there in person, plus the shortened seasons, and contracted playoff schedules. Many things about pro sports have just not felt “right” this year, but do not underestimate the massive following these teams and players have. Even as less people may have watched Lebron win his fourth championship, more and more were loading up on his rookie cards as solid long-term investments. Full disclosure here, I have a few of them put up myself, hoping he gets #5 before he retires.

Reason #6 – The staggering amount of dollars coming into our hobby from overseas has been industry-altering.

Millions of dollars this year have been poured into the basketball and soccer card markets. In January of this year, I sat at a dining table with Dr. Jim Beckett, founder of Beckett magazines, Beckett Media, and now host of his own daily podcast about the industry. I was invited to his home along with some other lifelong collectors, manufacturers, and “movers and shakers” in the hobby. I told those at the table that before 2020 ended, there would no longer be a “big 4” in sports collecting and that soccer would make it a “big 5” from now on. If only I had taken my own advice and loaded up on hundreds of unopened soccer cases for the next few months. I did thankfully buy a few, but wow, has this market ever exploded. Basketball and Soccer by far have been the biggest beneficiaries of the overseas spending spree that our industry has experienced.

After living through the late 80s and early 90s, it’s such a joy to type those words. The bottom line is that right now, manufacturers could quadruple production on most products, and those products would still sell out, and still sell for well above cost on the secondary market. That’s how much more demand outweighs supply when it comes to sports cards. We as an industry have gone through a whirlwind revolution in the last 3-4 years, and this year alone has taken on a life of its own. It’s not just the high-end products like Topps Dynasty or Panini National Treasures either. It’s regular issue Topps. It’s regular issue Donruss. It’s WNBA Prizm.It’s product after product from Leaf and other manufacturers.  It’s Topps Opening Day, for goodness sakes. There is just not enough product to go around. It’s a beautiful thing to pre-order products and not have to live in fear if I will get my cost back out of them, as I lived through enough of those years (and products) in the past.

For all the negativity surrounding breakers in our industry, they have expanded our customer base in ways that we as an industry were unable to do previously. Breakers spend hour after hour online talking to, educating, and entertaining consumers. Those consumers love watching breaks and a large percentage of them then want to go to a local card shop and buy sports cards in person, or shop with us on ebay or on our own websites. No, as a 30 year shop owner, I don’t like it when breakers get a bigger allocation than I do from a distributor, but I’m thankful for all the publicity they have generated and continue to generate for our industry.

Well, there are plenty of other reasons out there that our cardboard assets are now an “asset class” of their own, but we’ll save a few of those for next time.  In closing, I just want to say that it’s nice to “feel the love” from outside our industry after all these years. Lifers in the industry like myself have known all along just how great our hobby is, and how solid we believed our investments were, and now the world (from Wall Street to Main Street and everywhere in between) is waking up and taking notice. Mark my words, our industry is not going through a temporary “spike”, and there is not another 1990s “crash” coming. For this industry, I’ve never seen a brighter future, and I truly believe that the best is yet to come.